This year’s INDIEPUBCON convention with the theme Publishing Philippines ended on a high note, with approximately 690 recorded registrants for the event. During the four-day convention, readers, writers, publishers, and book enthusiasts got the privilege of experiencing online and offline talks, book launches, and workshops in different regions. 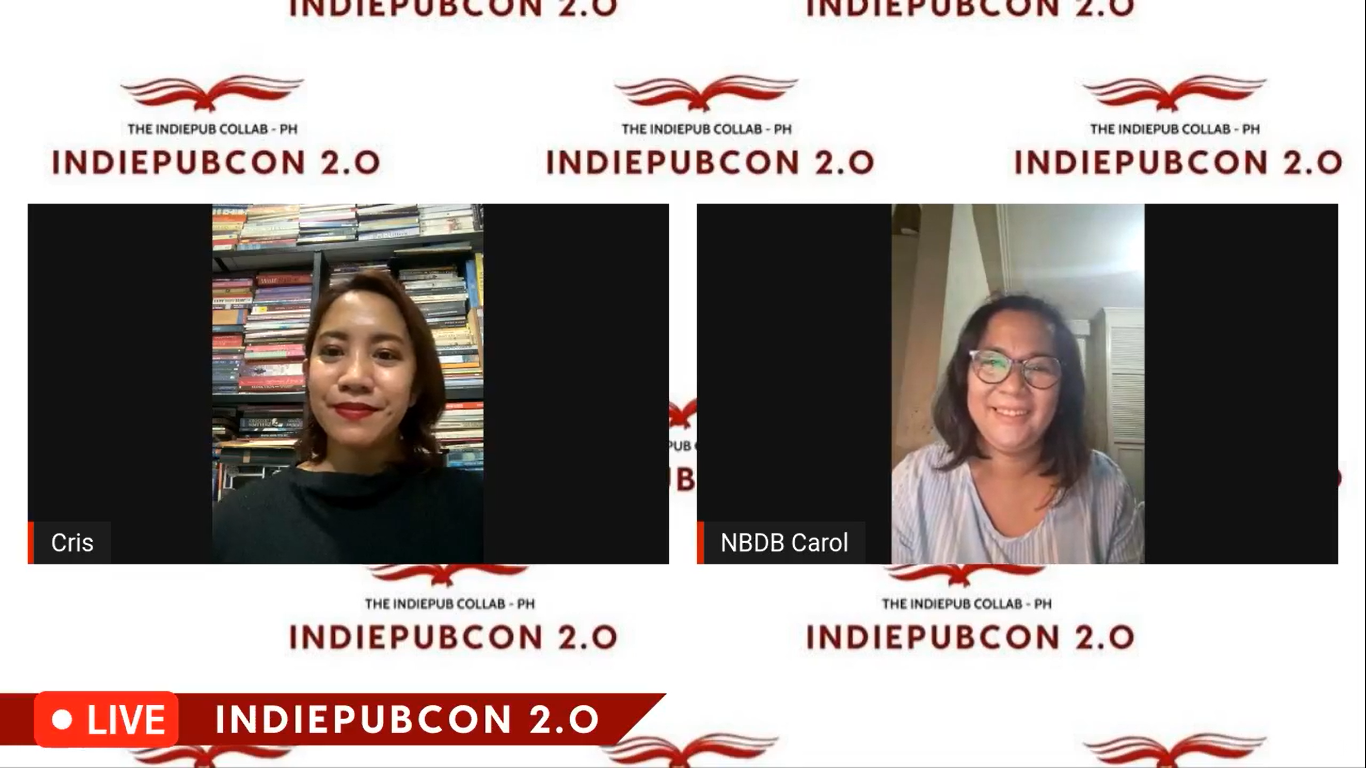 Last Nov. 24, The Indie Publishers Collab PH (TIPC-PH) took center stage and led the event’s virtual opening. The program includes recounting last year’s convention, along with its achievements. After that, Ms. Carol Tapia from the National Book Development Board was called upon to discuss the perks of being a registered author and publisher.

As this convention marked the first-ever INDIEPUBCON with on-site venues, here are the highlights for each regional convention in Ilocos Sur, NCR, Cebu, and Davao, in case you missed all the fun. 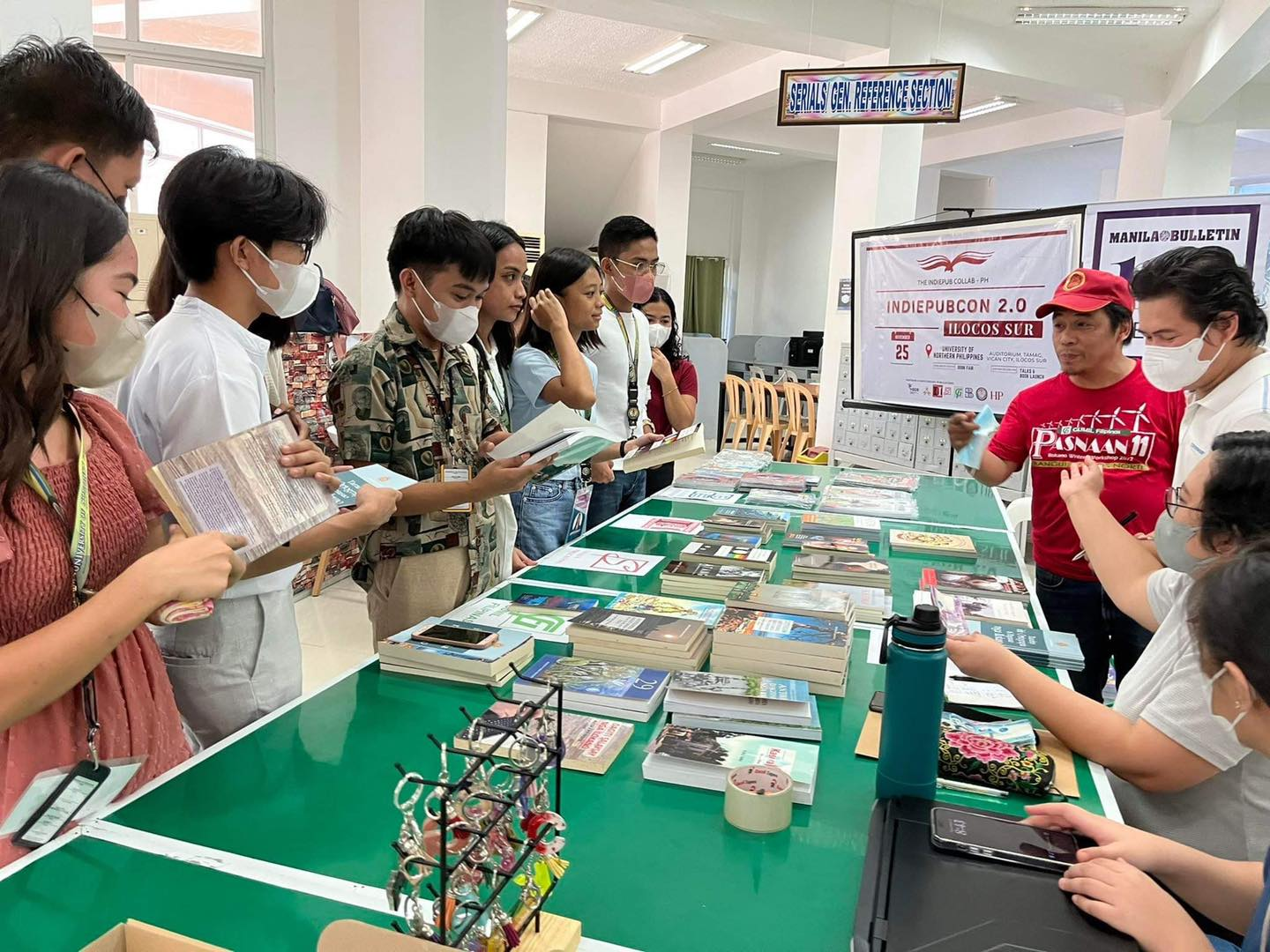 After the book fair, the afternoon session includes several talks. It featured esteemed Ilokano literature speakers Junley L. Lazaga, Neyo E. Valdez, and Mark Louie Tabunan. They delved deep into the region’s rich culture and community to discuss important points in Ilokano literary history, the conceptualization and influence of the Tagnawa System, and the opportunities for literary scholarships. 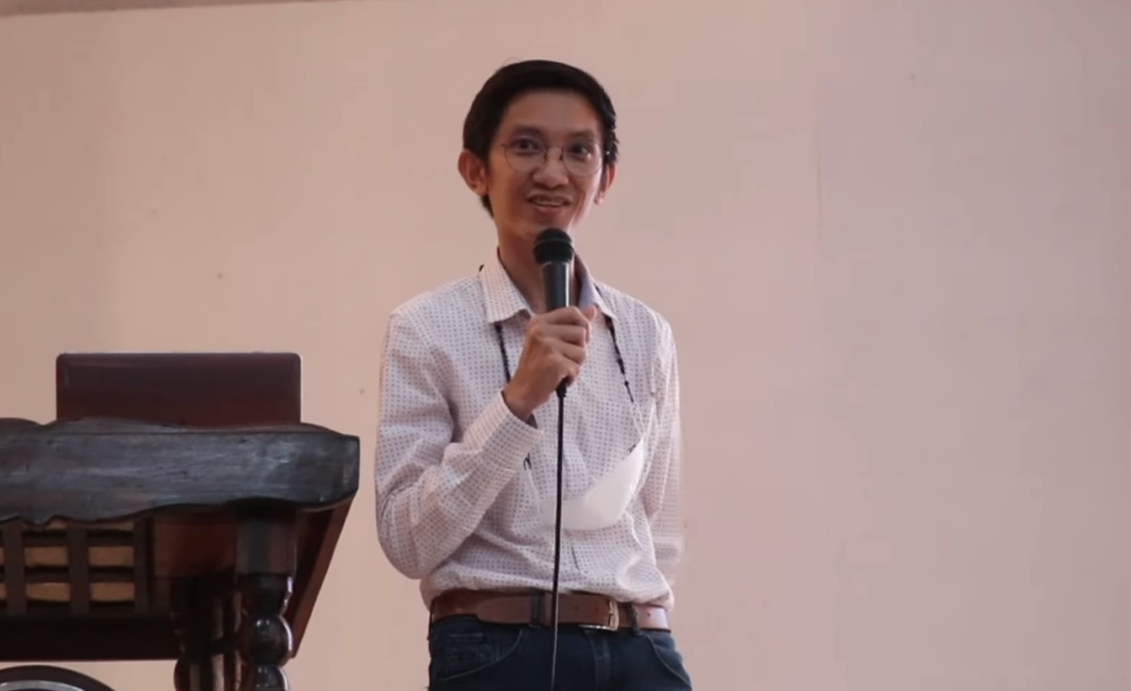 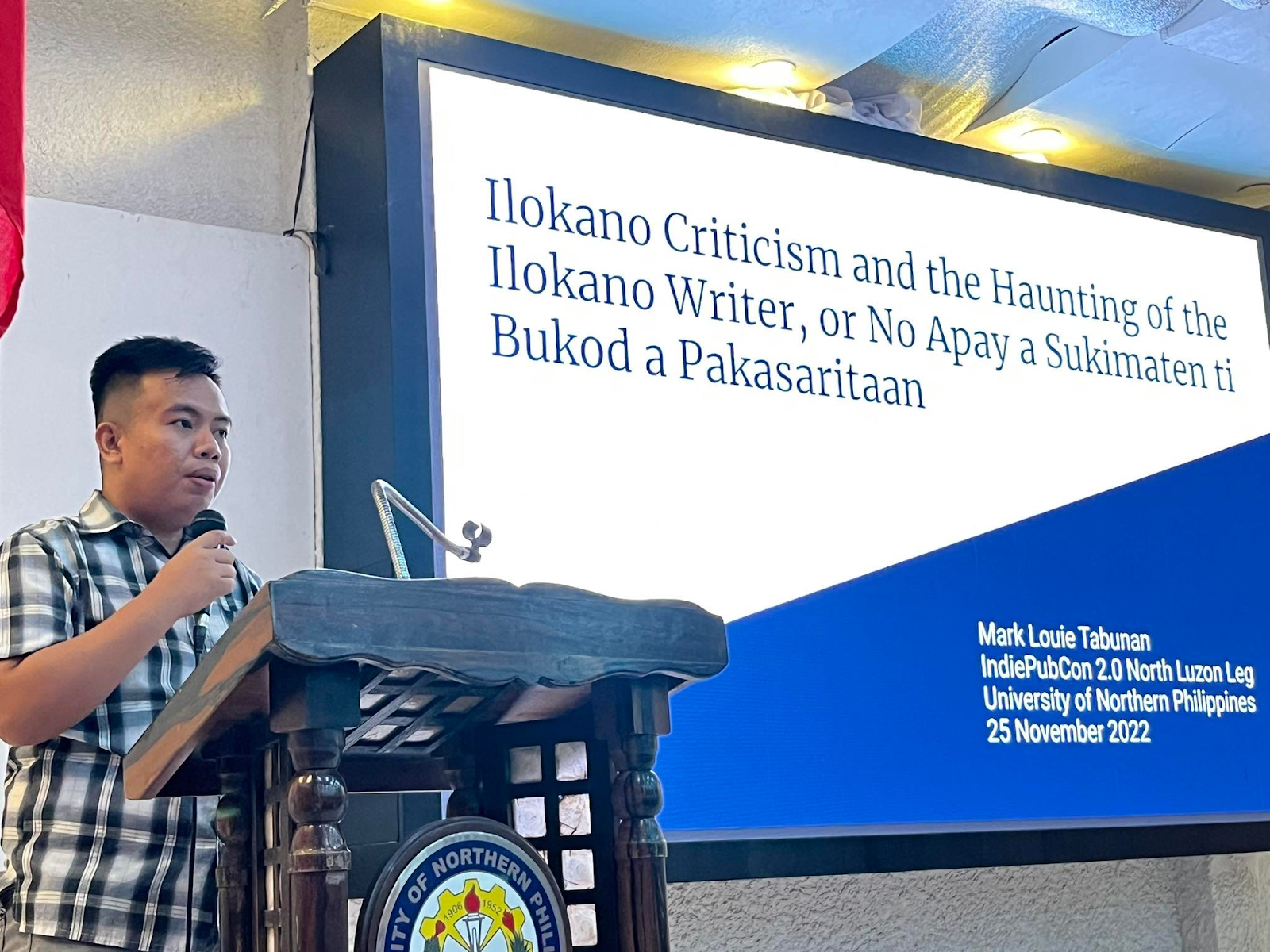 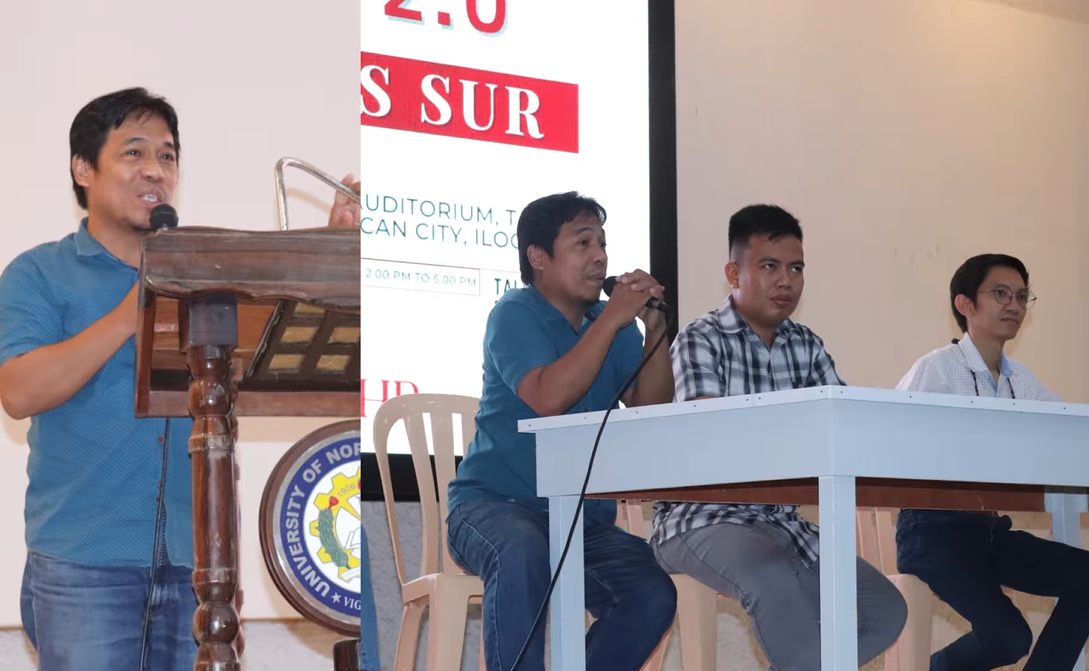 Neyo E. Valdez as a speaker at the INDIEPUBCON 2.0 Ilocos Sur Convention on Nov 25.

On the same day as INDIEPUBCON graced Ilocos Sur, TIPC-PH’s Southern Mindanao leg commenced at The Big House – A Heritage Home, Davao City. From 1:00 in the afternoon until 7:30 in the evening, the day was filled with discussing shared experiences about indie publishing and celebrating the region’s rich culture and language. 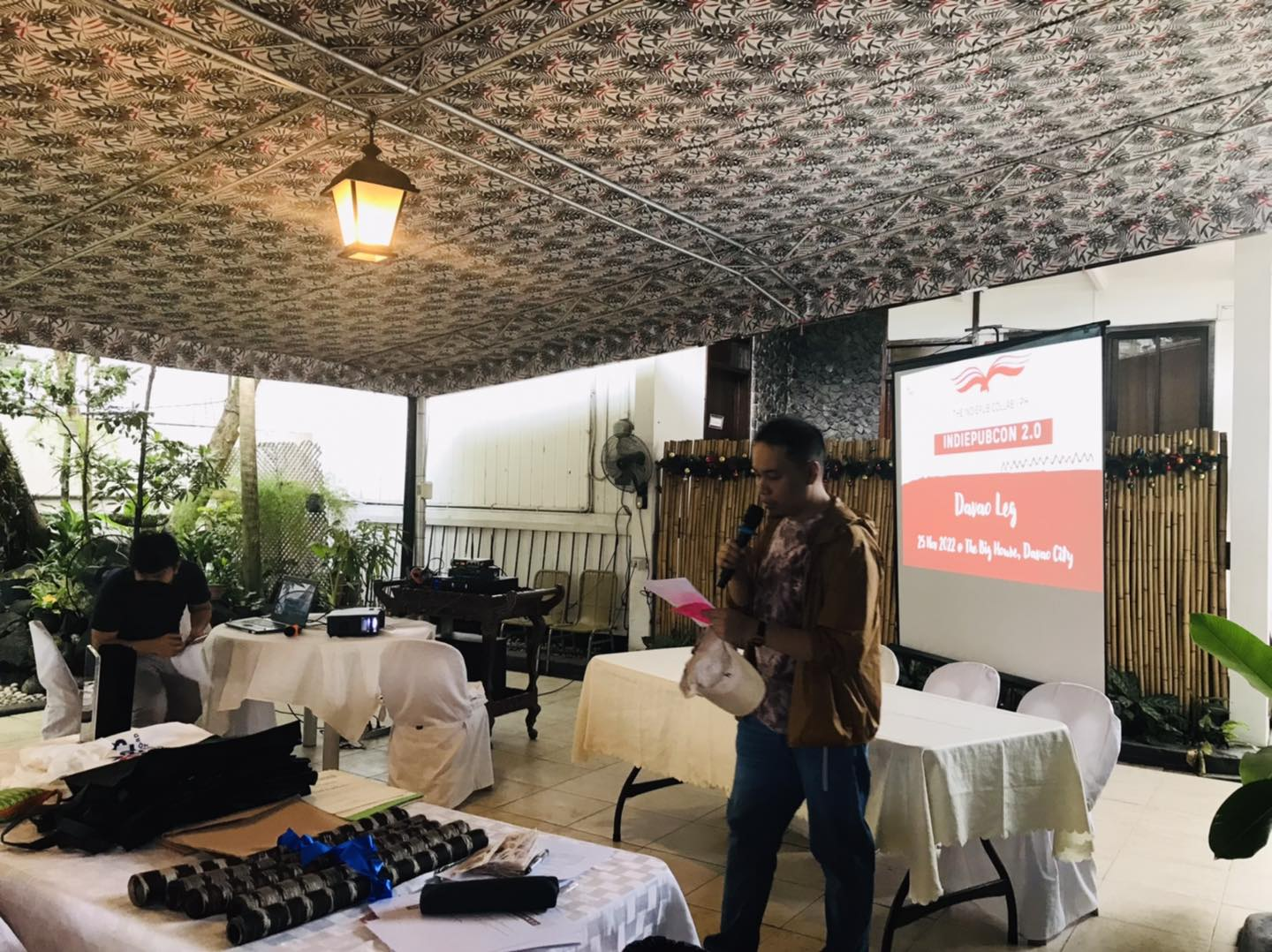 The first batch of talks scheduled for the event was entitled Independent Publishing in Southern Mindanao. It officially kicks off with representatives from three regional indie initiatives; Neil Teves of Buhagay Journal, M.J. Cagumbay Tumamac of Aklat Alamid, and SOX Zine Fest. They each discussed the course of action indie writers and publishers could take to further promote local publications in the region. 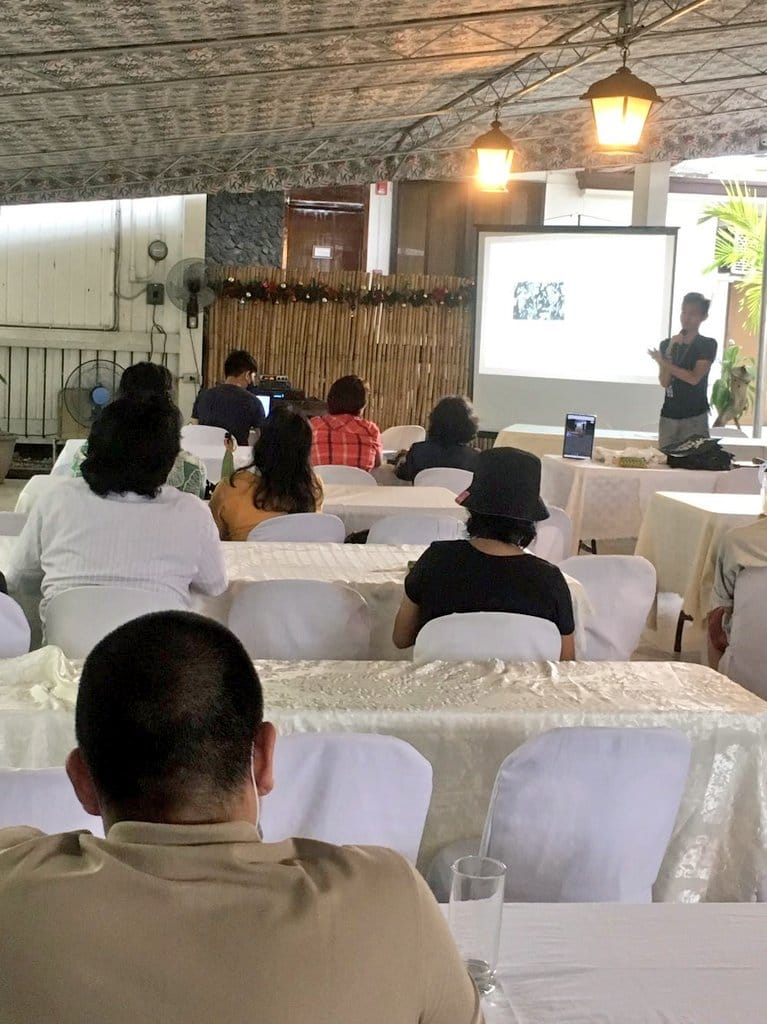 Neil Teves of Buhagay Journal speaking at the INDIEPUBCON 2.0 Davao Convention on Nov 25.

After that, the next session was headed by three exemplary women in the writing industry, Leila Rispens-Noel from 8Letters Bookstore and Publishing, Elizabeth Joy Serrano-Quijano from Davao Writers Guild, and Jennie Arado from Aklad Alamid.

“You can’t write if you do not read,” Elizabeth Joy Serrano-Quijano recounted the famous saying while narrating how she became fond of reading at a young age.

They exchanged views on how personal experiences shaped their advocacies and the politics of their writing. Each speaker shared the causes they actively supported and were a part of, like books written by migrant workers, Indigenous peoples, or ethnic groups. 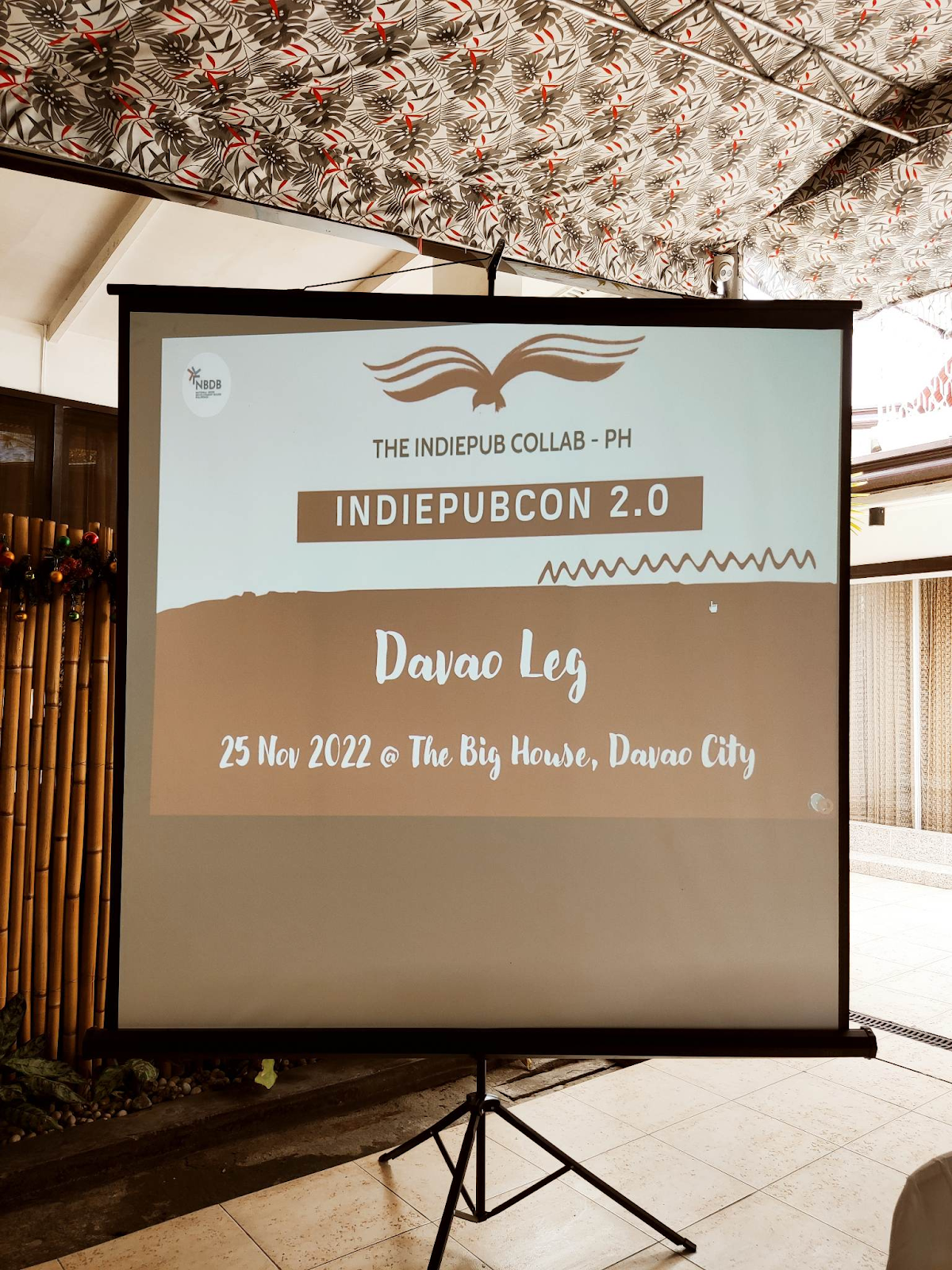 For the last session entitled Writing the Self and Indie Publishing, Reil Benedict Obinque and Jade Mark Capiñanes from Davao Writers Guild drew attention to the intimate nature of independent publishing and how this attribute works well in sharing one’s personal narrative.

As the event moved to its 3rd day on Nov 26th, INDIEPUBCON 2.0’s Director Cindy Wong announced the opening of the Cebu convention at Parkmall. The first among many panel talks scheduled for the day is the discussion about Celebrating Cebuano Writers’ Diversity with talented local writers Mitos Suson and Cindy Velasquez.

The writers delve into the importance of promoting Cebuano literature inside and outside the region. They also pointed out the available Cebuano books in the market, the target audiences, and how to make these works more accessible nationwide. 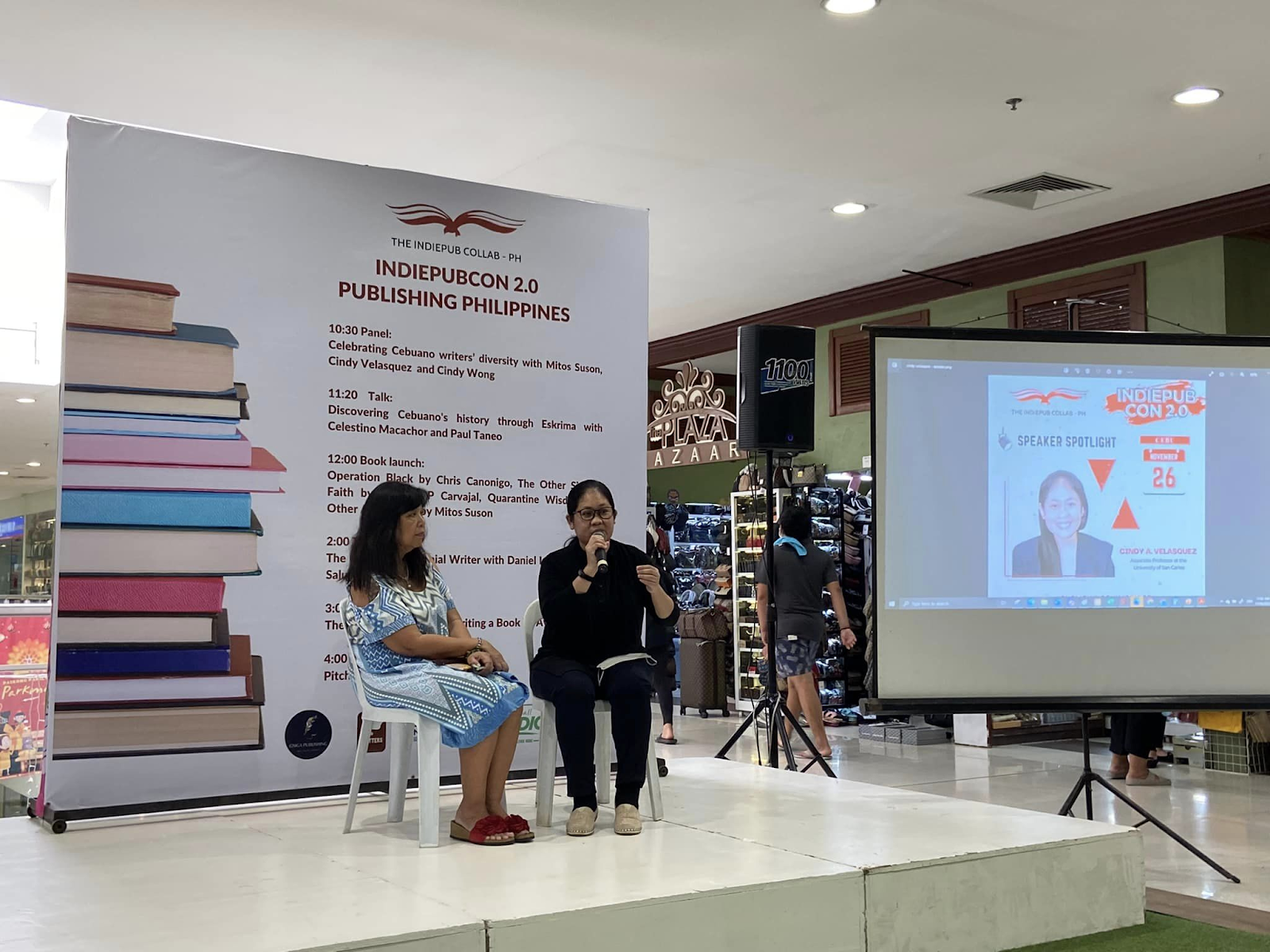 In a talk about the book Eskrima, author Celestino Macachor and editor Paul Taneo took the audience on a journey on the rigorous process they have gone through in writing this work. Along with sharing personal experiences, they led everyone to discover the rich history of martial arts. Celestino Macachor talking about his book “Eskrima” at the INDIEPUBCON 2.0 Cebu Convention.

Besides forums and talks, the Cebu convention also featured book launches for works written by Cebuano authors. This part of the event brought the spotlight to Operation Black by Chris Canonigo, The Other Side of Faith by Orlando P Carvajal, and Quarantine Wisdom and Other Absurdities by Mitos Suson. 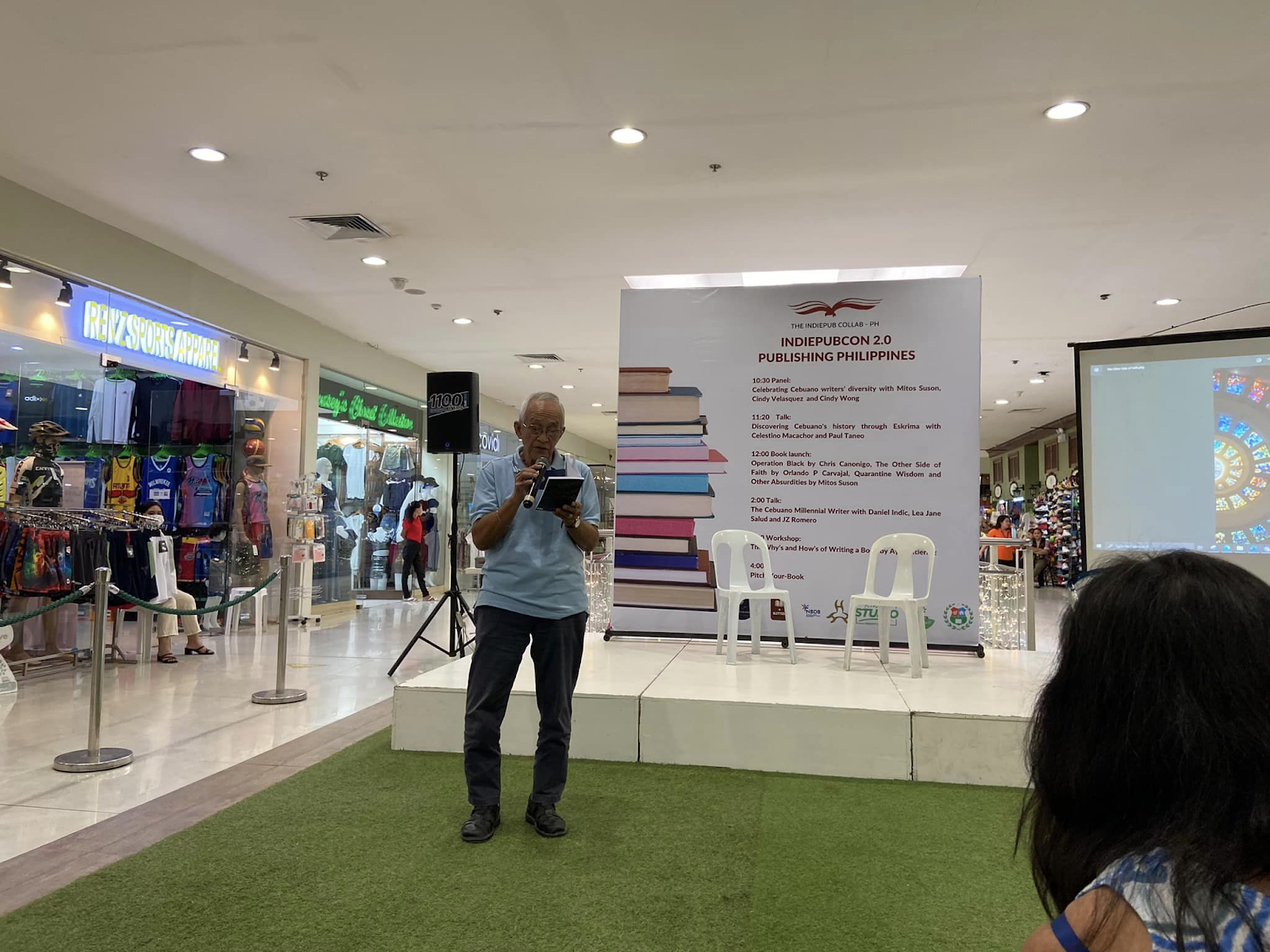 Orlando P Carvajal talking about his book “The Other Side of Fait” at the INDIEPUBCON 2.0 Cebu Convention.

When the event reached its second half, it was time for the Cebuano Millennial Writers to take over. The four-person panel for this forum includes Millennial and Gen Z writers in Cebu, Daniel Indic, Alyssa Caballero, Lea Jane Salud, and JZ Romero. These brilliant young minds shared their insights and familiarity with writing contemporary works and how these concepts came to life through their books. 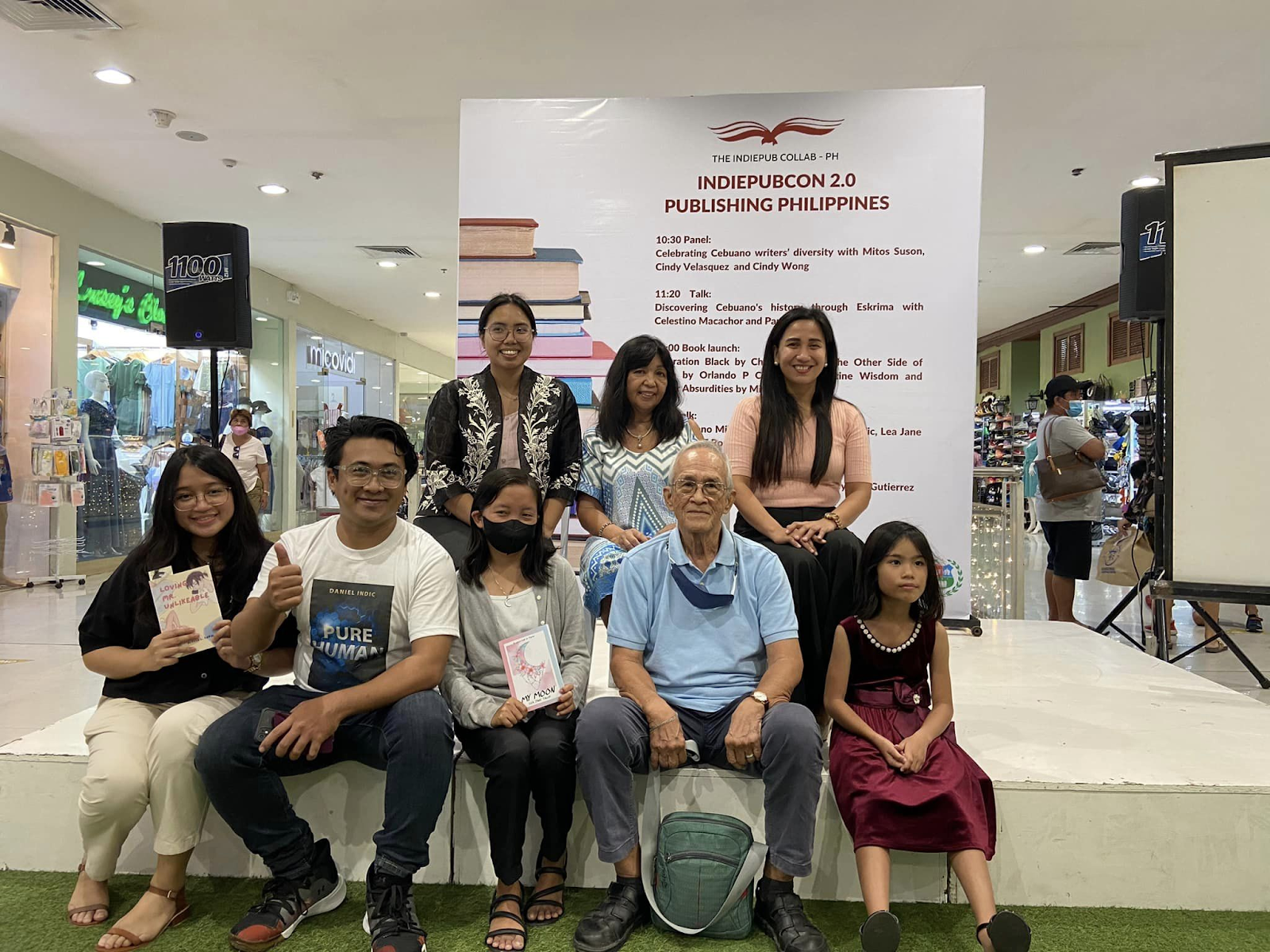 Before capping the event, Ayo Gutierez of GMGA Publishing graced the INDIEPUBCON Cebu stage to lead the Publishing Workshop: INK Your Legacy.

“You have a different way of sharing a story,” she reminded the audience as she covered the stringent process of writing and publishing a book.

As soon as the clock struck 10 in the morning of November 27th, the function room of Gateway Gallery started to be filled with attendees. They were warmly welcomed by opening remarks from representatives of the National Book Development Board – Philippines (NBDB) and The Indie Publishers Collab PH (TIPC-PH).

After that, Joti of Librong LIRA invited National Artist for Literature Virgilio “Rio Alma” Almario to the panel table to deliver the event’s keynote address. After a playful greeting, he asked which of the seated audience were writers, readers, and teachers.  He also emphasized the struggles of selling local books despite the country’s increasing population.

The keynote address is followed by a book launch and signing with the author of Agua, Enrique S. Villasis. After the live reading of the initial parts of the book, he walked the audience through the anthology projects of Librong LIRA and their advocacy to get poetries from local authors published in print. He also discussed his process of writing Agua, the challenges of writing poetry pieces based on the theme, and the inspirations that came along with it. 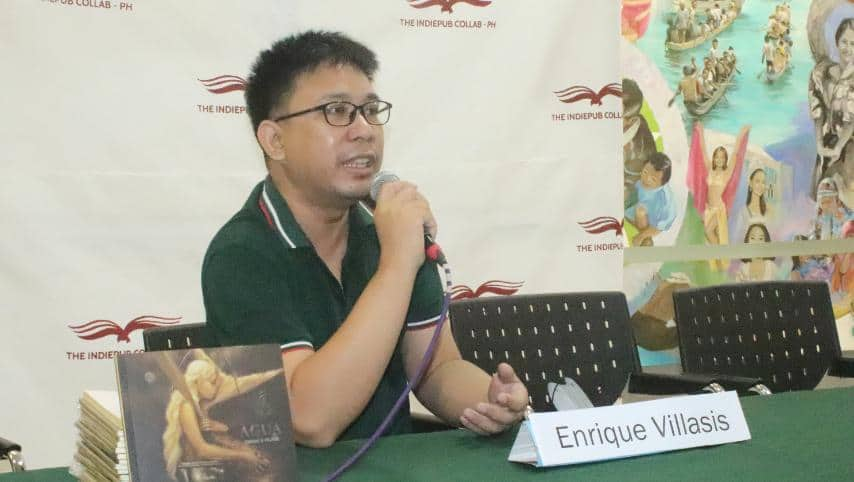 Enrique S. Villasis during the book launch and signing for his book Agua at  INDIEPUBCON 2.0 NCR Convention.

The next talk features Renato Vibiesca, Ph.D., as he recounted the struggles and opportunities the pandemic has brought to the indie publishing community. He sympathized with the authors and publishers who had to halt their projects because of the unprecedented worldwide crisis and applauded small presses for helping one another during these trying times.

Renato Vibiesca, Ph.D. as a speaker at  INDIEPUBCON 2.0 NCR Convention.

Before the event goes on a short break for lunch, a three-person roundtable discussion about Marketing Local Books During the Pandemic was formed by Emman Barrameda of Balangay Media Productions, Mookie Katigbak-Lacuesta of Good Intentions Publishing, and Marvin Aceron of San Anselmo. They are joined by Press Analyst and Marketing Consultant Vanessa Bicomong.

The exchange of insights touched base on the best marketing practices they acquired during the pandemic and how to use these methods moving forward. 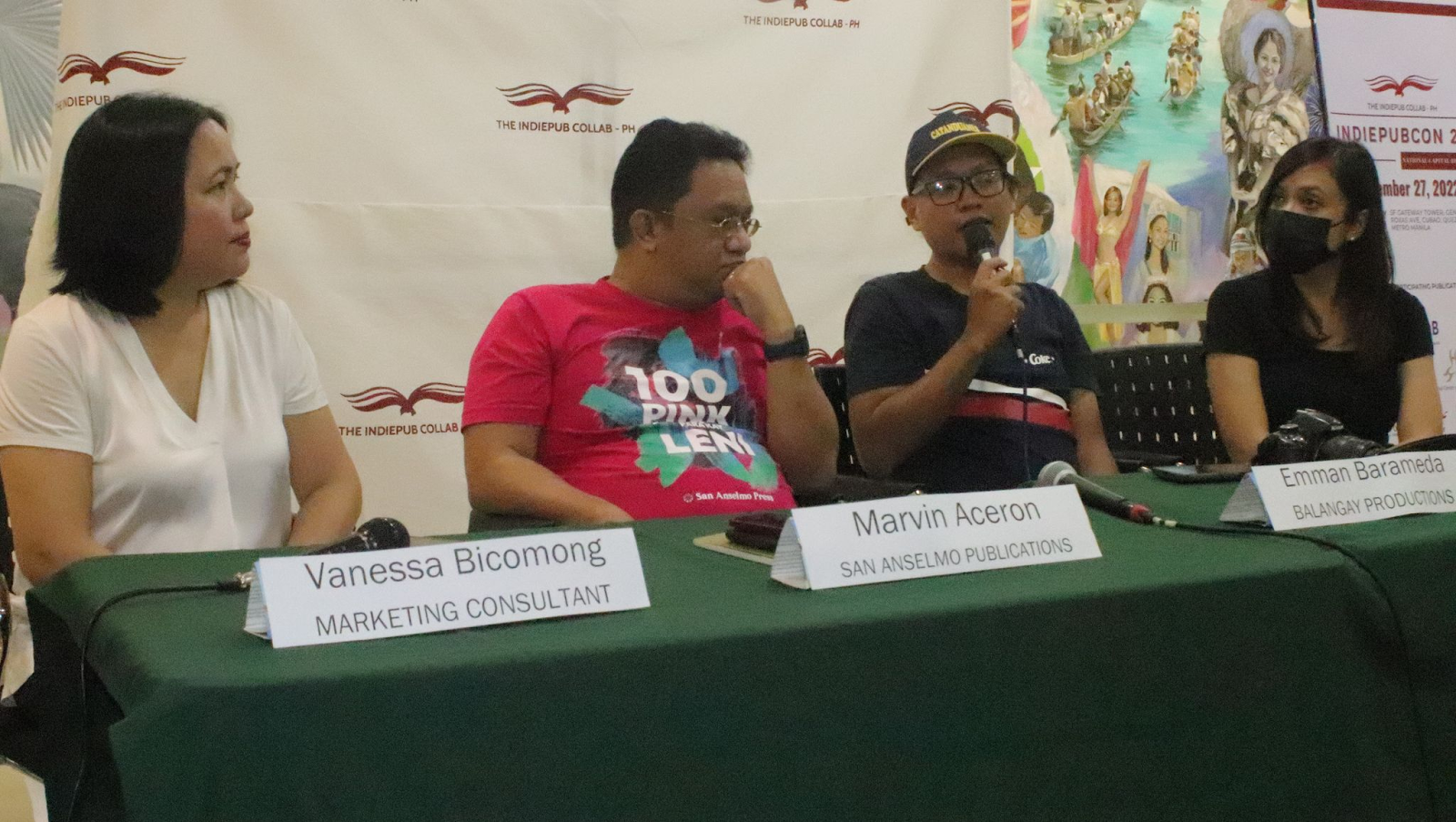 Roundtable Panel for “Marketing Local Books During the Pandemic” at  INDIEPUBCON 2.0 NCR Convention.

It was followed by a launch event of the children’s storybook with illustrators Ma. Victoria Esquillo and Bayani Olaguer and author Carla Mortel Baricaua.

In celebration of the weekend full of activities, TIPC-PH announced the winners of the INDIE BOOK AWARDS 2022 on the official Facebook page on the night of Nov 27th. The successful conclusion of this year’s event was all thanks to INDIEPUBCON 2.0’s participating publishers, the National Book Development Board – Philippines, and the Cultural Center of the Philippines – Intertextual Division.

TIPC-PH would also like to extend gratitude to the venue partners, Gateway Gallery, Parkmall Cebu, University of Northern Philippines, and The Big House – A Heritage Home, for warmly accommodating these on-site events,

Published by The Indie Publishers Collab-PH